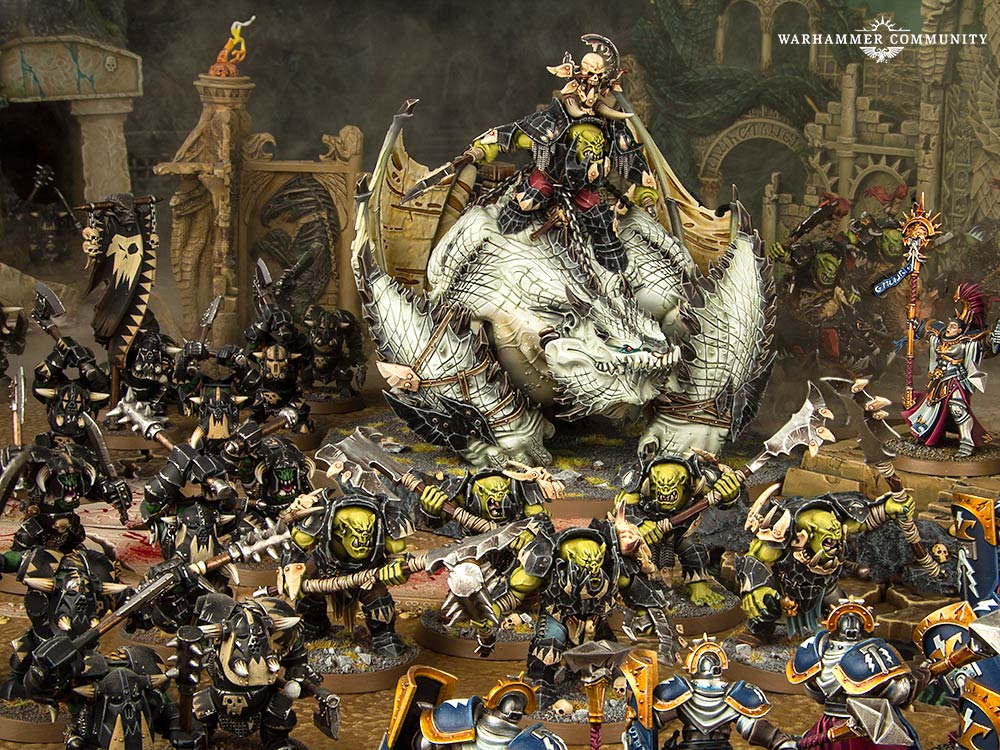 Having made his competitive debut at Border War less than 12 months ago, Joel has arrived on the Australian AOS scene with a bang, following up a 5-1 performance at Cancon 2020 by taking out Summer Smash in Geelong.

Let’s take a look at what Joel has to say about Age of Sigmar, Orruk Warclans, centrepiece models, Maw Krusha loadouts, tackling toolbox lists, wargaming in Wodonga and tournament life.

Thanks Pete for the opportunity to share my thoughts, long time caller first time listener. Orruk warclans is a faction that recently has captured my heart. Having mained orc characters on World of Warcraft for 10 years, I tried to avoid doing the same thing for the tabletop equivalent. But one can only resist the call of the Waaagh for so long.

Since you started playing competitive AOS, you’ve certainly made a big impact in a short time. What was your journey into the game?

Modelling has always been in my family with my Grandfather being obsessed with miniature railways and scenery, his entire 2 car garage being full of one of the most amazing miniature railway journeys ever created.  My Uncle is into WWII tanks and has a gorgeous collection.

My grandfather took me into the hobby shop at around 12 years of age, and while the tanks and planes were cool, there was something much cooler… Warhammer. While I couldn’t afford it at that age, recently I found myself yearning for something more interactive, tangible and real than computer games. That’s how I found myself watching videos on 2+tough’s YouTube channel, and I was hooked.

Albury / Wodonga is a real powerhouse of Australian wargaming. A relatively small place has kicked out a Cancon winner and an Australian Master – and now you’re adding to the tally of tournament wins. What’s it like playing locally – do you guys practice against each other regularly?

Our scene has a small population compared to other areas, so it can be difficult to get games and I’m lucky to get 2-3 a month. We have had one club day this year, and hopefully we can make it a regular thing, I’d love to be playing multiple times a week. So most of my time is spent theory crafting and list writing.

I noticed that you’ve gone from running Archaon at Cancon, to running a Maw Krusha at Summer Smash. Do you generally like building your armies around an ass-kicking centerpiece, or is that coincidence?

100%, it’s one of the pieces I enjoy using the most in AOS. Using big boys is a subpar way to play AOS; there is a learning curve in how to use a high point cost monster, but having done it for so long now they can win me games on their own (big time at Summer Smash).

Talk us through the list. What were your considerations when writing it?

I needed a big dude to delete the key piece in ny opponent’s army. With Mighty Destroyers and access to a teleport, the Maw Krusha is perfect for getting to and murdering what I needed it to. The Amulet + Weird Un meant that he was going to stick around for several turns; it also gives me better matchups against Hallowheart and Tzeentch. One of the unique things about a Krusha is that people look to chaff up your big piece, but for a Maw Krusha that’s not always a bad thing, considering I’m getting +1 attack and wound a turn just for killing them.

Going with the Krusha over a Rogue Idol means I went heavily Jawz over Splitterz, and I leaned into that with the IJ teleport (Hand of Gork) + Ironfist. The teleport hands down won me games, not just teleporting 15 Ardboyz in, but even just the threat: a key example being in my final game against Beasts of Chaos, where my opponent was forced to leave half his army along the back of the board just from the threat.

As I only had a single Warchanter, the decision to run 2x 5 Ardboyz really paid off, holding objectives and screening my Shaman and Chanter.

The most mental thing in Warclans though, and I may regret sharing this, has to be the Wardokk. For 80 points, you get an incredible prayer on a 3+, a cast and an unbind. It’s absolutely nuts.

The armies I’d struggle against would be Fyreslayers and the right OBR build, but all 5-0s have some luck and I avoided those armies.

Did you have a gameplan for taking on the top armies in the meta?

I’ll keep this brief as the shell of my army is similar to Pete’s and Dalton’s – but this is a very powerful army that is difficult to play, yet it has real game against everything right now – no matchup is unwinnable.

How did Day One play out? What were your highlights and exciting moments? Any learning points?

Game 1 vs Archaon Tzeentch: he had one 6 in the Destiny dice, and Archaon was rerolling everything. He gets through 3 wound rolls against my Krusha: first roll no 6s, second roll.. no 6s!!! Relief!! The Krusha then turned around and took off Archaon in one swing, fucking beautiful.

Game 2 was an almost-mirror against Dalton’s Big Waaagh in Knife to the Heart. Minor win. This was a non-game which was a bit sad really, as any other scenario could’ve produced a really interesting game.

Game 3 was an absolute slog against our good mate Ro with his Skaven, and let me tell you – Plague Monks are still completely insane. This was an absolute grind, and the Savage Orruks were worth their weight in gold by taking on multiple waves of Plague Monks to grind out a win.

Let’s dive into that last game a bit more. Skaven is the classic toolbox army with teleporting, shooting and chaff. How did you go about tackling that one?

So the mission was Focal Points. I gave Ro first turn, and all he had around his Gnawholes was Plague Monks. I put the 2x 5 Ardboyz on the deployment line to try and bait out the Plague Monks, but he didn’t take it. I had everything except my Savage Orruks outside of Warp Lightening Cannon range first turn, to bait them into shuffling forward.

On my own first turn I moved the 2x 5 Ardboyz onto the Gnawholes and had them shut down for the rest of the game: this is where MSU was very handy. Now this is where my list set itself apart by having both a Brutish Cunning Maw Krusha, and the pigs in an Ironfist. With a double Mighty Destroyers move, I was able to flank around the left hand side and get straight into his rear objective, clearing the Clanrats screen and dropping his Bell to half health.

At the end of my first turn, the scores stood at 6 to 3 in my favour. I got the double, cleared off a WLC, Bell and one wave of Plague Monks (he had 2x 40) and had most of his army stuck in combat with my Krusha and pigs at the back. I was 12-4 ahead at the end of turn 2, again won priority and the game was effectively over. Getting the double guaranteed the game, but I think this is a good example of why my list worked so well at the tournament.

And how about Day Two?

Game 4 was against Michael Clarke and his Hallowheart; Michael will represent Australia at the ETC later this year. Unfortunately for Michael, he made a critical error and didn’t screen my teleport. I placed my Shaman in the corner of the board to avoid any potential unbind, sent 6 pigs 12.1″ away, and a Mighty Destroyers left me with a charge I couldn’t fail. This meant that I removed his Hurricanum and Battlemage at the bottom of turn 1 and it was pretty one-sided after that.

Game 5, playing for the win against BOC saw my little hero – one of the 5 Ardboyz unit champions – survive 4 rounds of shooting and combat against a unit of Ungors, and eventually delete it on his own – mental.

Were you feeling nervous at all playing for the win?

Before the game yes, but once we started I settled into the game I was in the zone. Forward thinking in Warhammer can be very rewarding and that’s what most of my time on the table is spent doing – working out all the possibilities, what is going to happen where, average damages of units vs units, playing around priority rolls etc.

What unit was your MVP, and are there any changes you’d consider to the list? Were you happy with your Maw Krusha loadout?

MVP was the 6 pigs with the Ironfist battalion. Surprisingly survivable, there’s a lot of wounds in that blob and with a Warchanter buff on the charge they average just under 50 damage, just insane. The Krusha would be a close second.

Having Weird Un on the Maw Krusha was absolutely huge, I would never take anything else. It was a game changer against Hallowheart: my opponent cast a few debuff spells at him which I shrugged, and then tore him apart. Against Ro’s Skaven he shrugged a Warpgale which would have prevented him getting in as well. The Krusha does such insane damage, you don’t need to double down on it, just keep him alive and moving forward.

Next up for me is a trip to Adelaide for SAGT hosted by Doom and Darkness, I’ll be taking my totally original (not Dalton’s) Rogue Idol list.

To close, Thanks to the Throw the Dice team for a thoroughly enjoyable event and for supporting a good cause (all money raised was donated to helping wildlife). Shoutout to Michael Clarke for hosting the pissup Saturday night. To Pete and Dalton, couldn’t have done it without you boys, much love.

If you’re still reading this far, I love list doctoring so if you need help find me on twitter, @jc_graham.

Thanks for that Joel, and congratulations on the big win! Many more to come I’m sure – just not in Adelaide next week, that one’s mine buddy.

Next on the blog we’ll be catching up with Dalton who finished second at the event, also with Big Waaagh, to explore his Rogue Idol build.

5 thoughts on “Interview with Joel Graham, Winner of Summer Smash”