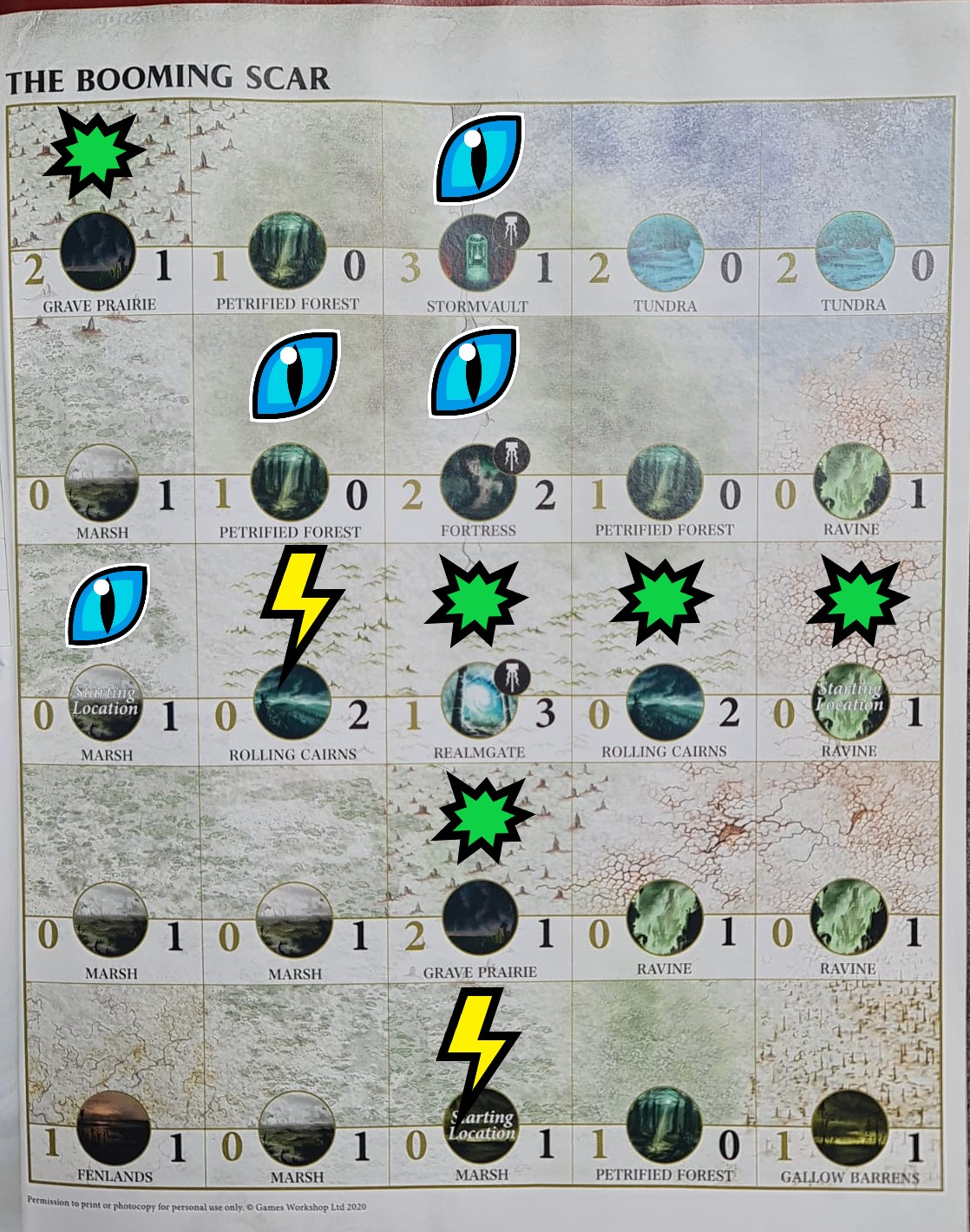 What the hell is Hallost? It’s a campaign system from White Dwarf that really did deserve to make more of an impact, and we’re giving a crack locally.

I’ve not seen or heard any online buzz about this and it seems to have largely sunk without a trace, which is kind of bizarre when you look at how well executed it is. If you’ve been playing through Hallost then get in touch and let me know how it’s going for you, but if not, it deserves a closer look.

In this first article I’ll be running you through what the campaign is and how it works, then we’ll track our own local campaign through its 5-Week run in future articles.

What the hell is Hallost?

Shyish has some of the coolest fluff in the Mortals Realms, straight up. Hallost specifically is the Land of Dead Heroes, a huge continent within the Realm of Death where the souls of great Ghurish warriors live on. It sounds to this Theologian a lot like Valhalla: a land of feast halls and eternal battle, with their souls reborn day after glorious day to fight and die again. It also sounds a lot like Orc Heaven, which works in well with their Ghurish roots.

Sigmar, being the biggest twat in the universe, had to ruin this for everyone of course. He came strutting into town, took away his pick of souls to join his own ranks, and left everyone else behind to rot. Cheers for that.

There are loads of little hooks here: the Realmgates that still link back to Ghur, bringing constant streams of Greenskins crashing through; Chaos incursions, and the ebb and flow between Archaon and Nagash that comes with them; and perhaps most intriguingly, the internal tensions and factionalism within the rulers of Hallost. There are those who respect Sigmar as a Warrior King, and those who hate his guts for what he did to them; there are those who welcome the living into their lands, and those who banish them; and even those who have sworn allegiance to Nagash as their great chieftain.

Hallost is teeming with possibilities, and what we’ve got here is a super thematic campaign set in that location.

Why would a competitive player even be interested in playing a map campaign?

This is a topic we have covered once before on the blog, so I would (of course) encourage you to take a look at that article for more thoughts on the subject. I won’t go back over the same ground in detail, but there are a few good reasons why I think this can be of value even to a hardcore tournament player:

How does the campaign work?

There are actually a few different campaign maps across the run, each exploring a different region within Hallost.

The first thing you’ll notice is that every location on a given map has two numbers printed on it: at the bottom left (in gold type) we have the Resource Value (which gives you campaign points, and directly contributes to the win condition); and in the bottom right (in black type) we have the Power Value (which gives you power points, that you can spend on power-ups to help you on your way).

Obviously some locations are more valuable than others – that’s kinda the point. Also labelled on each map are Starting Locations (there are various campaign maps for 2, 3 and 4 players) and those little Sigmarite logos denote the Key Locations that bring in-game bonuses: an extra artefact, an extra CP, that sort of thing.

Campaign win conditions are typically based around holding the most key locations at the end of the final round, with the tie-breaker being campaign points (remember that little number at the bottom left of each location?), although this does vary from one campaign map to the next.

After each round of games, you take turns to conquer new territories on the map and then spend (or save) your power points for bonuses. There’s also a “campaign event” to be rolled for each round, but this is really just RNG crap – most of them are just bonus campaign or power points for holding random types of territory.

The win conditions, on the other hand, are a little work of genius. Because most of these campaign maps hard-sort on ley locations, that keeps things interesting right up until the end: a big push against the odds in the final round, and you can sack their cities, conquer their territory and secure the future of your clan.

That doesn’t invalidate all the work you’ve put in up until then, because the in-game advantages ratchet up, and the campaign points accrued give the front-runner the tie-breaker; but at the same time, it keeps everyone incentivized and engaged right the way through. The bonuses you gain for holding the key locations are meaningful but not game-breakingly dumb, so overall I feel like they’ve really struck gold with this structure.

What narrative wankery is this?

Hallost is a playable Realm, with its own full set of Realm Rules. Oh yes!

Loads of rules revolving around heroes, which is fitting for the setting. I really like this exploration of what Realm rules can be – and I’m sure we’ll see more like this.

How was it released?

The campaign came out across multiple issues of White Dwarf, starting with issue 452:

This is an essential purchase. We have:

Moving on to The Booming Scar, this issue brings us:

This time we explore Vaddenheim:

The lore is honestly a bit more superficial in this one, but it’s still worth picking up for the map and missions.

Wrapping up the run is The Dreadscape:

I strongly advise against rolling on that table and taking it as gospel: some of the missions are excellent, others are not even remotely functional. You don’t need me to explain to you why a Battleplan that gives out VPs for dispelling Endless Spells is wildly imbalanced to the point of not even being a game in any meaningful way. This is most definitely a case of “talk to your opponent” and discuss what you’ll be playing, rather than wasting your time with the non-games that rolling blind on the table will sometimes throw out.

If you’re at all interested in running a campaign, you should consider picking up the back issues over here:

Issue 452 is essential to give you the fundamentals, then you could pick and mix from the other three depending on how many players your own campaign will have. I do personally think that all four are worth grabbing if you have the resources though, so you have access to all the Battleplans and campaign maps.

How are we playing it?

Our own path was to start off competitively, then slide back a little from there. The reasoning behind this is that at the time of inception we were in training for Vic GT, meaning that we ran our competitive armies for that event and used it as tournament practice. That in turn meant using the Battleplans from the Vic GT tournament pack, as well as their format for Realm Rules for the first couple of Campaign rounds.

With Vic GT having been and gone, the intention is to lean more and more into the Hallost side of things. Those of us who were at the event will be changing up our lists to run something a bit different, and we’ll be ramping up the narrative rules firstly by bringing in the Hallost Realm Rules, then adding the Hallost Battleplans into the rotation.

If it becomes too whacky we can always switch part of that back off, and take a step back closer towards the Campaign as a set of standard (but connected) Matched Play missions – but I think the Hallost stuff looks interesting enough to at least be worth a try.

We’re currently up to Round 3 of the campaign so look out for one article to summarize the first two rounds, then we’ll take it from there.

2 thoughts on “Casually Competitive Hallost Campaign Part 1: What the Hell is Hallost?”