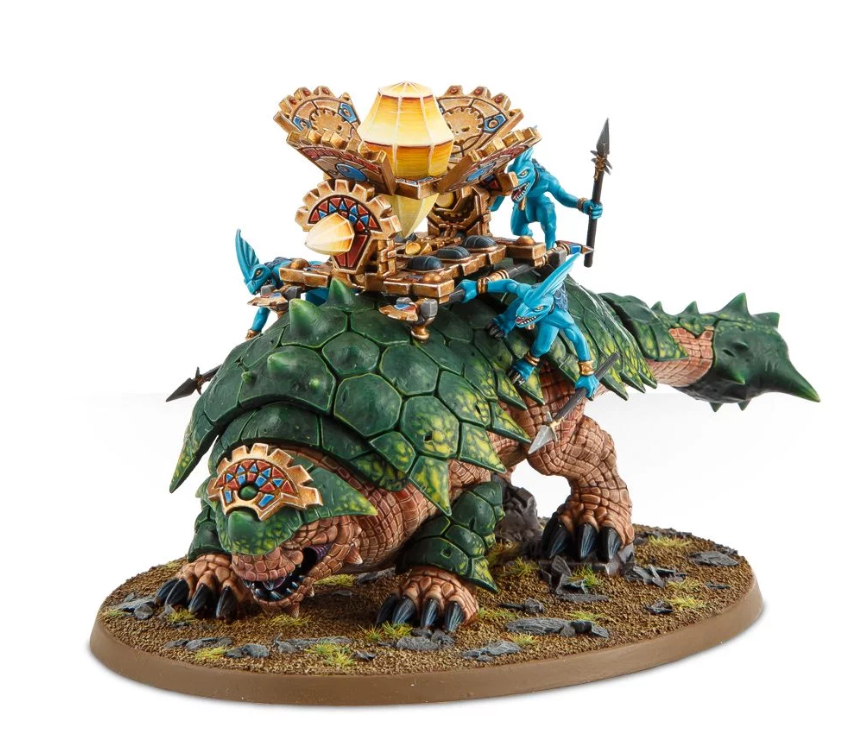 OK, I admit it – I was entirely bewildered by that Seraphon FAQ.

Luckily, I was able to call in some help from the kind people in the Gloomspite Whatsapp group (shoutout to Craig, Will, Hammy and Nathan), but I’ve seen the discussion and questions continue online.  This is my attempt to provide a definitive explanation of why this was the correct ruling, and how it all works.

At the end of the article I’ll also deliver a few words on whether I think this amounts to an OP unit and how to deal with the Basti; so smarter people than I, who are already across these rules interactions, are welcome to skip over the science part!

Fundamentally, the issue was that this ruling drew on two separate elements of the Core Rules, without specifically citing them.  Oops.

This mental shorthand does work in general, which is why we lapse into it in the first place – but not here.

Here’s the reason why:

This is the actual rule (Core Rules, page 7):

The key clause being that you modify the roll. So when you are hit with rend -2, your 4+ save doesn’t become a 6+ save. You still technically have a 4+ save; it just becomes harder to roll a 4+ after modifiers.

On the tabletop, that of course means that you need to hit a natural 6 to make a 4 after the -2 modifier, which is where the mental shorthand comes in: we all know from thousands of repetitions that a 4+ save being hit by rend -2 requires nailing a 6 on the physical dice to pass.

So in our heads, we’re taking the armour save, adding the rend and that’s how many pips we need to see on the dice. Which is why it’s so fucking easy to lose sight of what we’re actually doing here (and the clue is right there in front of us, in the minus symbol of a rend -2 characteristic): we’re modifying those 6 pips down to 4, which is exactly what we need to pass the save in this example.

Ok then, let’s apply the rend -2 to a natural 2 and make it a modified 0, which still fails?

Well, now here’s the rub: you can’t modify a dice roll below 1. This is set out on the Core Rules, page 12:

If you’re looking at a natural 2 on the dice, and apply a modifier of rend -4, it still bottoms out at a modified 1. That’s a hard floor that cannot be bypassed: and a modified 1 is all they need to pass the 1+ armour save.

But what about the Rule of One? I thought 1s always failed?

Yes…unmodified 1s always fail. If you roll a dice, and that single pip or skull is looking back up at you, that’s an unmodified 1 and it auto-fails. That’s addressed and confirmed in the first line of this FAQ.

But that doesn’t mean that modified 1s always fail. As noted above, a natural 2 on a dice hit by even rend -4 bottoms out at a modified 1, and that modified 1 passes the 1+ save.

So it’s a bit weird and a bit counter-intuitive, but not actually that complicated. It’s only natural 1s that auto-fail; if you rend any other natural roll down to a modified 1, that can still pass.

Also known as: “What about the Castellant?”

Yeah, it’s not symmetrical. Now, you could say that makes no fucking sense whatsoever – and I wouldn’t disagree with you – but to be fair, it is right there in black and white:

This whole thing revolves around a quirk in the Core Rules. A dice can roll a natural 1 to 6. You then apply modifiers to it to determine the modified result. You cannot modify a roll below a 1, but you can modify it above a 6.

I personally see no good reason or logic behind that asymmetry, but it’s been right there since the 16 Pages dropped; and although it’s a bit weird, it really couldn’t be clearer.

A similar case to consider is our old chum VLoZD. The reason he can benefit from both a 3+ Save and Ethereal Amulet is that his Ancient Shield ability gives him a 3+ Save characteristic:

Whereas Ethereal Amulet switches off modifiers to the roll:

Because Ancient Shield is modifying the Save characteristic (what you need to roll), and Etheral Amulet only switches off modifiers to the save roll (what you actually roll), he sits in a nice spot where he can benefit from the Shield while still ignoring rend.

Have they done a bad job with this FAQ?

Nope. Although I said at the start of this article that the ruling was baffling to read and comprehend – which it is – that’s because it’s such a convoluted interaction, not because the FAQ was badly written per se. Given the hand they were dealt, I actually think the phrasing itself is concise, accurate and complete; that being said, I would certainly have liked to have seen the FAQ cite the Core Rules it leans on, to give a better explanation for why this was the correct ruling.

There is a problem within this FAQ, but the Bastilodon ain’t it. The bigger issue for my money is the Ripperdactyl CA: spamming CAs is a zero-skill move that leaves nothing but a sour taste, and the decision taken back at the start of Second Ed to allow CAs to stack by default was a breathtakingly bad idea.

Lo and behold, CAs that have no business being spammed have slipped through the net. What’s disappointing is how often it happens: again and again and again and again we have books coming out with spammable CAs. Going forward, can you please check every CA you write for spammability before you hit Print? C’mon man, how many more times!

Is the Bastilodon with this 1+ save problematic?

Eh, not really. Not in my opinion at least.

It’s true that it will take a surreal volume of attacks to break through – you can basically give up on fighting it with conventional means. Even elite attacks from anti-monster specialists with heavy rend (looking at you, Big Stabbas) will fail to make a dent, so we’ll need to look elsewhere.

“Just take Mortal Wounds” is in danger of becoming the new “Just shoot the Heroes” here. It’s true that not everyone has ready access to build Mortal Wounds into their list with any reasonable level of efficiency – but let’s be fair, we’re not talking vast numbers of Mortals here before it’s back into volume-of-attacks territory, and the number of armies who can’t build in enough MW to at least crack the shell really is approaching an edge case.

So if you can, do. And you probably can.

Worth mentioning is that by tagging it in combat, you can force it to shoot your chaff. The whole point of bringing a shooting unit like this is that it can choose prime targets – but not if it’s locked in combat. For that reason, it can be worth charging even if you know you can’t kill it.

Otherwise, you’re looking at the classic “Ignore it, and play the Objectives”. But you know what? That’s valid here. This isn’t a unit that puts out an unreasonable amount of hurt. This isn’t a wrecking ball that presents a threat disproportionate to its points cost. This isn’t some relentless, fist-swinging nightmare that will just walk through your whole army if you don’t tackle it. And it’s only 1 model for scoring Objectives so yeah, do that. Play around it.

In all honesty, I quite like this rule. It’s super-thematic, being in that big hard shell and all; and if GW are going to explore this design space, I think it’s a good move to do it on something where the underlying Warscroll is not an overwhelming powerhouse.

I remember the Treelord Ancient back in the day, with its 2+ save, rerolling 1s, ignoring rend -1 (and bear in mind that rend -2 and Mortal Wounds were rare and precious back then). It was functionally unkillable for many armies; there’s nothing especially new about this phenomenon.

I’ve seen players – good players – dash themselves against the wall of that thing in morbid fascination, flinging their entire army at it just to see if they could kill it. That almost became the game in their head – kill this thing and win, fail to kill it and lose. Meanwhile they lost the actual game on the scenario and got their asses kicked by Scythe Hunters, regardless of what was happening with the dumb old Treelord Ancient.

Don’t do that. Don’t waste your time, resources and mental energy on it. It’s only a fucking Bastilodon.

Well I hope that discussion helps you as much as talking it out with the legends in the Gloomspite Whatsapp helped me.

I mentioned on Twitter that I would be taking a break from updating Plastic Craic (I’m an essential worker and things are pretty hectic currently), hence the release rate of articles slowing to a trickle recently. I’ve honestly got LOADS I want to talk about when things normalise a little, so please keep following the blog, keep your chin up, keep safe, keep healthy and keep painting those models.

One thought on “What the FAQ? Understanding the Bastilodon’s save”