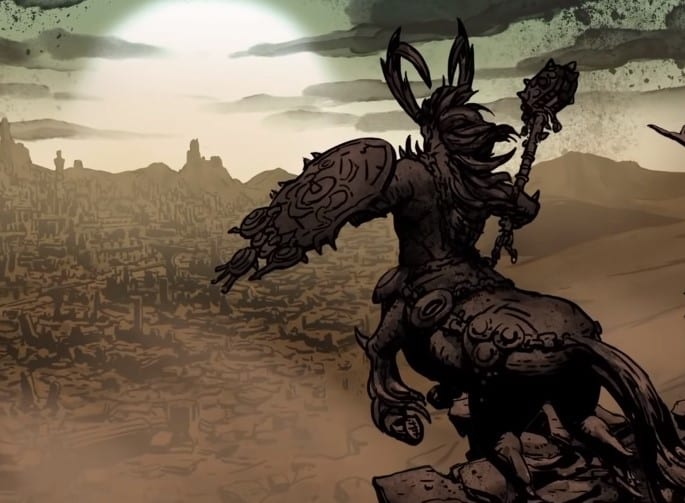 BOOM! Destruction has a new god-level character about to hit the game like a meteor. What do we know so far? And what’s coming next?

Fuck knows, but let’s have a crack anyway!

We learned a few things from the GW stream:

Worth mentioning too is that this is a one-shot release, not a full army: as detailed in the original trailer, his people are missing, poor fella.

We can go a bit deeper on those last two bullet points, because GW have spoiled their specifics:

In practice it makes him bloody close to magic-proof, which is a huge deal. The first thing that springs to mind is that looking at the dominant armies in the game, Tzeentch and Seraphon (and even KO with the Rat Trap) rely to a large extent on crapping out mortal wounds.

Coupled with his 2+ armour save, it makes him a tough nut to crack for a lot of armies. From what we’ve seen so far, Skinks will still mortal him off the table with minimum fuss, but hopefully we’re approaching the stage where the data on Seraphon is undeniable.

Forget about mortal wound spells though – bypassing control spells will be huge. The brand new shiny Bound Shards of Valgharr can get straight in the sea, and better yet: fuck you, Total Eclipse, I’ll use those CPs however I like thank you very much.

Also, let’s just give a tip of the hat to that Designer’s Note, clarifying this rule for us in advance. Well played.

Now onto his next rule that we’ve seen:

Yeah that’s pretty weak, especially given that the purpose of the piece was presumably to get the hype train rolling. Hopefully the point being made here was “Look, he works with all of Destruction!” rather than “Look, this is his big selling point!”.

This one is decidedly meh, and will hopefully prove to be nothing more than a minor footnote in Kragnos’ history.

What we haven’t seen

Kragnos is billed as The Living Earthquake, so will that be reflected in his rules? Does he make the pathetic structures of man crumble into dust (screw you, faction terrain), or maybe remove cover saves from enemies?

Perhaps the tremors he brings forth cause enemies to lose their footing (half your movement, sucker), or makes them suffer the classic-smooth D3 mortal wounds in an AOE bubble? There’s loads you can do in this space, from the inconsequential to the insane. I’m hoping for the insane. Not gonna lie.

How will he interact with the rest of Destro, beyond a lame Bravery buff? The big question I have here is his keywords. Quality of life in Chaos list building is sky high, because the whole GA is a keyword jamboree: a Chaos god book can never have bad chaff, because they can always draft in Marauders and give them the whole suite of Allegiance abilities. Similarly, Archaon can skip merrily from faction to faction, rerolling whatever the fuck he likes because he can bring the Warshrines and Sorceror Lord along for the journey.

The closest thing we’ve seen in Destruction so far is the Rogue Idol in Big Waaagh, enjoying as he does both the Ironjawz and Bonseplitterz keywords, with two full sets of buffs. Double moves, better saves, doing shit in the Hero phase and extra damage – it’s party time!

Will Kragnos end up as a plug-in beatstick, like Gotrek, or a list-writer’s wet dream like Archaon? It’s the biggest question, and it will all come down to his keywords.

Cards on the table – I don’t like it. He has a bit of swagger, and I think he’ll have some real presence on the tabletop – but I can’t unsee that face.

It’s tiny. The stream did reveal that there are two head options in the kit, and I’m super keen to see the other one in the flesh – I think there’s a real chance that could rescue the whole model. Failing that, I’ll be doing a headswap, most likely trying out Mega Gargant and Mancrusher Gargant heads for size when I have the model in hand – and either trimming off the mane, or Greenstuffing it up into a Mohawk.

Perhaps the most likely of all is that I attempt the latter, make a horrible mess, and check down to the former. But let’s at least have a crack.

And we can’t shy away from the other elephant in the room: Kragnos doesn’t have a donger. I’ll be Greenstuffing onto him something that a Melbourne Cup winner would be proud of, because otherwise it just ruins my immersion, y’know?

If you love this model – and I already know some people who really, really do – then fair play to you. I’m personally pretty flat on it currently, but hoping that an alternative head could catapult it swiftly upwards, and he’ll be strutting around the tabletop like he owns the damn thing.

There’s been a lot of chatter that this doesn’t look like a Destruction model, and I tend to agree. Beastmen players think we stole their release, and you could also make the case for it as a Kurnothi model, inkeeping with their savage and untamed aspect explored in Dark Harvest.

Either way, he doesn’t really look like a Destruction model to me, and I’m not going to pretend to like the look of something just because GW gave it a certain keyword. Ultimately I’ll be OK with this guy being in Destruction as long as the fluff gives us a good reason for it, and going off the storylines in Broken Realms so far, there’s a good chance that it will.

What I do like about him is the cave painting imagery that GW put out on their Insta – just the iconography alone manages to tell its own deep story of an ancient power worshipped by lost civilizations. It ties in so well with his shield (see below), giving Kragnos the feel of something truly primeval.

And let’s be honest: if his rules are busted, that’ll certainly nudge me to embracing him into the fold. Not gonna lie.

Now let’s have a punt on how the Broken Realms storyline will develop, and lead us into AOS 3. Until Kraggy came around, it all seemed to be set up for Gordrakk to lead his Big Waaagh to lay siege on Excelsis, and then onto Azyr:

And more recently, the focus was still on Gordrakk advancing his hooligans towards Sigmar’s front door:

How will it all tie together now?

These are not spoilers, just my own speculation, but nonetheless you read on from here at your own peril.

Let’s have a crack at reading the runes.

We already know from Battletome Orruk Warclans that Gordrakk will lay siege to Excelsis:

Excelsis is without a doubt the coolest city in the Mortal Realms – City of Secrets marked a leap forward in both the timeline of the main setting, and the quality of the Black Library support for AOS. If you have yet to do so, jump into it.

Listening to the headcannon for someone else’s army is about as engaging as some tosser banging on at length about their fantasy football team. Unless it’s your own army nobody gives a rat’s ass, so I will spare you the full exposition, but Excelsis is a big part of the background to my own Sons of Behemat army and for that reason, I’m very invested in this storyline.

The big hook about this place is Glimmerings: little husks mined from a mystic rock that are consumed as a narcotic, each dose giving the recipient a tiny glimpse of the future. I can’t wait to see what that looks like in rules terms, although I do hope they leave the priority roll the hell alone and get a little more creative than that.

Anyway, Gordrakk will lay siege to it, maybe because it happens to be on his doorstep in Ghur, maybe to collect a MacGuffin that allows him access to Azyr. Either way, Excelsis is fucked.

Prediction: Gordrakk will get a shiny new warscroll, and will smash the city of Excelsis to pebbles as the opening act.

Punt: We will get playable City rules for Excelsis, with a cool mechanic based around Glimmerings.

This isn’t Gordrakk’s book, it’s Kraggy’s, so with Big G having set the scene it’s time for the new lad to get involved. We’ll no doubt get a heap of exposition on his back story and how he was chained inside Beastgrave by Kroak back in the day.

Prediction: The sacking of Excelsis sets off earth tremors / a burst of energy across Ghur (delete as appropriate) that weakens the bonds shackling Kragnos. Let’s gooooo!

Punt: Kroak gets “improved” right off that Balewind Vortex with an increased wounds characteristic.

The Siege of Azyr

Remember when we saw the Contents page for Katakros, and knew right from the chapter headings what the entire plot would be?

Well this is same same…but different.

It can go two ways: hopefully it’s nothing as cheesy and predictable as in-fighting between Gordrakk and Kraggy costing them victory, ending on the everybody-wins fudge of “Sigmar finally repelled the invaders…but at what cost?”. You’d be brave to bet against this, but I think they can and will do better.

My call is that Gordrakk brings his Waaagh to the Gates of Azyr, looking for the rumble to end all rumbles. He starts banging away, cracks appear…and Goldenballs rallies the full Pantheon of Order to the cause. Every sanctimonious flog in the Mortal Realms flocks to his side and they start to turn the tide…until Kragnos turns up.

GW have really been pushing the angle that Special K likes fighting Stardrakes, so he’ll probably kill a super special one of those, and the Gates of Azyr will be breached, dangling us the ultimate cliff hanger leading into AOS 3.0.

Prediction: Kragnos gets his own faction abilities, for a Pimped-Out GA Destruction Jamboree Waaagh

It’s set up for Destro to be the main protagonists for a while, the latest faction to step up and bravely face down the neo-colonialist Order machine. There could well be some internal tension and rivalry between Gordrakk and Kragnos, which is pretty intriguing too.

Grimdark Live are pushing hard on the angle that we’ll get a new Grot faction in the starter set, which definitely has my interest, and that little icon on Kraggy’s base certainly looks Grot-tastic to me:

I’ve heard other chatter that there’ll be a new Orruk Warclans book out early in the edition, potentially with Wave Two of Ironjawz.

Exciting times, my friends! This is most definitely preorder material for me: I’m super keen to get my hands on this book and see just how good Kraggy’s rules are. I’m unabashedly hoping for him to be broke as fuck.

Can’t wait to find out.