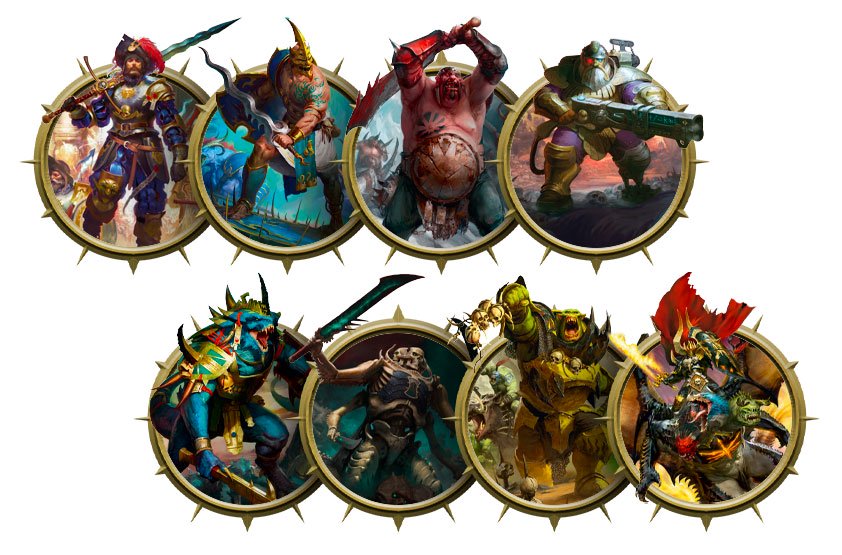 I’m a competitive gamer at heart, but that doesn’t mean I’m only interested in 2000-Point Matched Play in its purest form. It’s certainly what I’m most interested in, but it’s not the be-all and end-all. We were all drawn to this hobby by the fantasy setting and cool minis, so I believe that there’s a little narrative wanker in everyone.

Team games have always been particularly popular in our local gaming group, so the Coalition of Death content in GH20 was one of the first things I jumped into.

We weren’t quite ready to go Full Narrative, so we completely skipped the Team Battles rules on pages 46 and 47 this time around, but that’s the beauty of something like a Coalition of Death Campaign: if your group skews casually competitive, you can agree to trim down some of the whacky stuff, and play a campaign as a linked series of Matched Play games.  So that’s what we did.

Why play a campaign at all, if you’re a Matched Play gamer at heart? Wouldn’t you be better off just getting more reps in with your proper 2000 point armies, on the new Battleplans?

Well first of all, maps. I fucking love maps.

And second of all, this is bloody good practice. Don’t worry, you’re still building lists and working out cool combos.

When you get to the tabletop, you are absolutely playing a tactical and strategic game: none of us are declaring charges with a Wardokk because “I feel like he would charge”; that little fucker is staying safe and sound behind his screen, believe me.

All it’s doing is adding to the experience by linking tactical games together in a memorable way.

Thirdly, I genuinely believe that it’s important to put yourself in new and unusual positions,

If you’re a serious competitive gamer, you clearly need to know what’s required by the current set of missions to the point that it becomes instinctive, and you need be fucking razor-sharp on exactly what is out there. That separates you from the herd, but it’s not everything.

You’re going to find yourself up against it at some point. You’re going to face an opponent playing a build way out of leftfield, a smart General who pulls a rabbit out of the hat, or have a game where the dice fuck you over royally, then fuck you again for fun.

When Plan A goes belly up, what will separate the Bosses from the Gits is who can keep calm and think their way through it. Putting yourself in unusual situations with unusual armies on unusual Battleplans trains your mind to be elastic, and you can’t put a value on that.

Other people are obviously welcome to charge small buffing heroes into a blender if it suits their storytelling; other people are welcome to skip this stuff entirely and crack into another round of Kroak vs Kroak. But for most people, I think this is not only valuable practice: it’s bloody good fun.

How does it work?

The Whisper Engine campaign is set in Chamon, and you’re chasing an artefact with the power to sort truth from lies. You’re playing teams every week, but the composition of those teams changes every time. We’ve jumped into a 5-player campaign to run over 4 weeks: four consecutive Friday nights. Nice and punchy, keep it simple and crack open a few cold ones to wrap up a week at work.

If the bidding is cagey, the game will be stupidly drawn-out with 5 huge armies, somebody is going to be the fat kid picked last in sports, and it’ll still end up with too many points on one side. What we’ve done instead is randomly-assigned teams, with the people who end up in a team of 3 getting fewer points per person:

The Armies: We decided that it would feel more meaningful if we each stuck to one Allegiance for the duration. We have Seraphon, Fyreslayers, Kharadron Overlords and Beastclaw Raiders.

I’ll be running “A Rhapsody in Gloom”: taking Gloomspite Gits each week, but cycling through each of pure Squigs, Grots, Spiderfang and Troggoths.

The Map: Argetoria has 19 locations, and in a 5-player campaign you pick 3 each to kick off. This is the first little piece of genius: it seemed weird at first that 15 of 19 locations were claimed before you’ve even got started, but that all made sense after our first game.

You’re stealing territory from each other from the very first week and believe me, nothing puts the competitive into narrative play like seeing your territory get conquered.

Week 1 was all “Hey, this is fun, I’m running pure Squigs”; watch your mate wipe your initials off the board and take your land, and you’ll switch gears into a blood vendetta pretty fucking quickly. Nobody was bringing Squigs in Week 2, let me tell you.

Several of the locations give special bonuses: these are generally pretty well-judged to be meaningful but not game-breaking. We’re talking about things like an extra Artefact for your army, or an extra Command Point. The only one we tweaked was the one for “1 additional force point”; this is analogous to 100 Matched Play points, but since we weren’t doing the bidding thing (nor playing with that many points), we bumped it down to 50 points. That felt fine.

Scoring: This is the second really smart thing the Campaign does. After each round, every player claims one piece of Territory, starting with the winners. Winners cannot have territory taken from them (not even by each other), so their Lebensraum ratchets ever upwards; losers look nervously at their key locations, and at the tanks parked on their lawn.

You score one Glory Point per piece of land held, plus a number of Glory Points equal to the size of your single largest group of territories. So if your land is clumped into blocks of 4 and 2, you’ll get 10 Glory: 6 for the total of 6 territories held, plus 4 for the block of 4.

So that’s your first dilemma right there: do you grab land that gives you the best bonuses in-game, or do you forego better locations to develop your powerbase? Do you buttress a location whose bonus you’re desperate to keep, or make inroads towards something shiny?

There’s an art to playing the map in the same way that there’s an art to playing the scenario, and frankly, I’m yet to master it. I grabbed a clump over here for bonuses to cast, a clump over there for extra points in my army, and as a result my dominion is fractured. Through the first two weeks, I’m literally winning the battles but losing the war.

This is how we stand after two weeks, and it really couldn’t be better poised going into the stretch:

Once you’ve conquered new lands and totalled up the Glory, you roll up the teams for the following week, and you start plotting for the battle ahead. Last week’s comrades become this week’s enemies, and your group fractures into a whole new set of side-chats. Glorious.

After the alloted number of rounds, you add up your Glory points and declare a winner. It’s great fun, it’s memorable and it’s very, very tactical.

Now like most people, I’m more interested in some things than others, so if I skip over part of this book that appeals to you, it is what it is; I like what I like, you do too, and that’s what makes the world go round. Let’s smash into it.

Not for me. I am a huge fan of what GW are doing with White Dwarf these days, but I skipped over this when it was published in there the first time around, and I’ll skip over it again, because I just don’t care. There’s literally one Destruction warsrcoll in the entire thing, so that doesn’t help, but honestly I don’t have any real inclination to learn some banking and wheeling system.

If I’m having a skirmish game on the side, it’s because I want something fresh and a break from the Mortal Realms. The superb Marvel Crisis Protocol scratches that itch for me. I can imagine that if I was in my early teens, I could have spent an entire summer holiday playing this obsessively with one mate, and remembering it fondly for life. There will be someone somewhere who is having a ball with this, and good luck to them, but it ain’t me.

Not strictly Narrative Play, but it makes the cut here under the guise of “stuff I’m not interested in”. They lost me at bases hanging off the edge of the board I’m afraid.

It’s very reminiscent of the way that Path to Glory is thrust into Battletomes between the army rules and the Warscrolls. It’s transparent as fuck, and we’re not falling for it. Please stop.

Meeting Engagements got very little traction as far as I can tell, but I’m sure there is a group somewhere that is lapping it up, and good luck to them, but it’s not for me.

Reading between the lines, I believe that this is a passion project for one particular GW rules writer. The resources that have been pumped into it for a second consecutive year are certainly seem to be driven by an internal push, moreso than any great clamour from the player base.

I’d personally have preferred that time and energy to be devoted to improving the points review, but we all should recognize that ours isn’t the only opinion that counts. There are people out there who love this stuff, and good luck to them; there’s plenty in this book for everyone.

Overall Grade: A+ for The Whisper Engine

The structure of rolling alliances is very well-conceived; the map puts you into each others’ faces, and has you getting each other’s backs up from Week One; the bonuses for holding key locations are nicely judged and thematic.

You can lean into the narrative side and use the full alliance rules, or you can trim it down to a linked series of Matched Play games like our group did. Either way it’s a great structure that can adapt easily to any gaming group’s needs.

I won’t be giving a grade to the other Narrative aspects of the book, because I’m not really the core audience for that. There will be other people who have given them a fair go who can rate them properly, but I’m not in a position to do that.

So if you love Meeting Engagements or Skybattles, let me know why you think I should give it another look.

On the flipside, if you’re a hardcore tournament player who is cynical towards the whole concept of campaigns, I hope I’ve given you the spark to reconsider.

Whatever your favourite flavour of Warhammer, you’ll be able to make it work for you. You’ll have a ball.